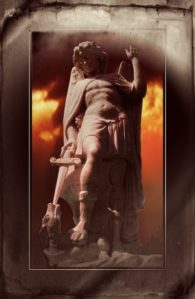 are among the most widely known angels working with mankind. The archangels are the captains of all the angels in the angelic kingdom. We know them as:

Each of us has a set of bodies, of which the Physical is only one. The others include the Mental Body, and the Emotional Body. We also each have a Soul group — the larger entity of which we are a part; a Personality essence — our outward side, or the way we interface with the physical world; and a Monad to which we belong — the group of Souls that are engaged in whatever is our mission on the Earth plane.

A “Ray Reading” is like an astrological chart, only it describes which of the 7 Rays overlight each of the 7 aspects of self listed above. You can find people who do these readings by searching on the Internet.

Here are some of the kinds of results that can occur through the influence of the Rays on the various “bodies” of our being.

For example, let us say that our Emotional Body is overlighted by the Fourth Ray. Since this Fourth Ray IS an emotional energy, we would be doubly affected in our emotions by whatever happens to us. If someone asks us, “What do you seek in this lifetime?” we might answer, “I seek peace of mind!” And our highest criterion of value would probably be “beauty” — that which evokes the emotional response of love, gratitude, peace, harmony, and truth.

What if our personality is in the First Ray? Then even when we have the purest motives, we may appear dominating to others, whose experiences of power in this and past lives are not always of the best.

These are just a few examples. According to RLP, Djwahl Khul says that one of our jobs in this lifetime is to balance the Ray energy of our Soul with that of our Personality.

Invocation to the Rays

When we are doing inner work, we can call forth the energy of the Rays, asking the Archangels of each Ray to imbue us with the attributes of the Creator in these specific ways.

And when we are experiencing the negatives of some of the Rays, we can ask the Archangels to send us the energies we need to counterbalance these. For example, if we are experiencing the indecisiveness that comes from Fourth Ray tendencies to look on all sides of any question, we might call upon AA Michael and the First Ray energies to mobilize our Will.

Especially, we may ask that all of the energies affecting us always be balanced by the over-arching energy of the Divine Plan, so all that we think and all that we do may be “in Love and Service.”