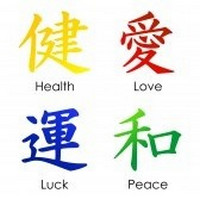 Reiki is a system of healing that employs the powers of meditation to transmit healing energy of ‘Ki’ or life force to the sick person, using ‘hands’ as instruments to pass and enhance the flow of Life Force Energy. They are like keys that open doors to higher levels of awareness and manifestation.

Dr.Usui first saw these symbols, in the form of light. These symbols have metaphysical energy and it is sent to the body, mind, soul, and the whole universe for healing. Symbols are used in reiki to activate the reiki energy flow. Study of these symbols opens the gates to spiritual power and awakening.

Many Reiki Masters consider the Reiki symbols holy and persist in the old Reiki tradition that they must be kept secret. The symbols should only be available to those who have been initiated at the Reiki 2 level. Today I feel that this approach is no longer relevant as the symbols have been described in many books and are freely available on the Internet. Reiki practitioners and Masters, on occasion, find out they have been attuned to and taught Usui Reiki Symbols that have different lines, extra lines, and lines that go in reverse directions. There are a few reasons for the variations of the Reiki Symbols. In the past, Reiki Symbols were taught orally and students were not allowed to write them down for hundreds of years, so when it was time for them to teach the Reiki symbols, again, it was taught orally from memory. Because that was not the best system in terms of accuracy, variations in the symbols did develop. Now, Reiki Symbols are written down, which keeps the variation to a minimum.

1. Chou Ku Rei- It is the power symbol, which directs energy to the physical body. It is used to purify the recipient from negative influences, while offering protection from envy and manipulation.

2. Sei He Ki- It is the mental symbol, which directs energy to the emotional body or subconscious mind. It is used to treat the cause of disease within the emotional and mental bodies. This symbol helps to balance the left and right sides of the brain. This symbol also helps calm emotions and gives clarity of thought. It protects the practitioner from bad vibrations.

3. Hon Sha Ze Sho Nen- This is the third symbol known as the distance symbol. It is used to send reiki to the past, present or future. It directs energy to the mental body, or conscious mind and assists in changing thought patterns. It is a symbol for karmic healing as it helps to heal karma.

Dai Ko Myo– It is the master symbol, which means great shining light. It is considered to be the light of the Buddha, used to heal the soul. Only reiki Dumo masters can use this symbol, which assists in alleviating pain or disease.

Reiki Symbols as keys
The Reiki symbols are like keys that open doors to a higher mind. You can also see them as buttons, when you press the button you automatically get a result. In my opinion one of the functions of the Reiki symbols is to instantly override the user’s precognition that some things cannot be done (i.e. distance healing). The symbols trigger a belief or intention built into the symbols that helps the user to get the results intended. The different symbols also quickly connect the user to the universal life force.
When a Reiki Master does an attunement and shows the Reiki symbols to a student, the form of the symbol is impressed in the students mind and merges with the metaphysical energies it represents.
When a Reiki practitioner draws, thinks about or visualizes a symbol it will instantly connect to the energies it represents.

The form of the symbols

The Reiki symbols are partly based on the Japanese writing system, Kanji. The symbols should be drawn or visualized as they have been taught during the Reiki 2 Attunement. As more and more people get attuned to Reiki this will mean that there can be a great number of variations between the symbols taught by different Masters. This is not really a problem as there is not a 100% right or wrong way to draw them. The Reiki symbols given to a student will work however they look as they incorporate the intention and the connection to the metaphysical energies it represents.